Skip to content
Happy Easter!
I would love to dedicate my post to my beautiful father in Heaven and would love to tell you my testimony.
I grew up in a Christian family, however walked completely away from the church from the ages of 16-24/25. Always thought there was a ‘ God ‘ and ‘ Jesus ‘. But never had an encounter and never truly believed it in my heart.
I went through years of relationships and heartbreaks to fill my voids. I was highly insecure, and tried to work on my physical appearance to make myself more worthy.
I stole growing up from shops. I was highly jealous of other girls, to the point it ruined a lot of my romantic relationships.
I swore like no tomorrow, boys even saying I was rough and I had a potty mouth.
I was very angry and very aggressive. Literally would pull a girl down the stairs if she pushed me. I grew up rough and acted this way because I thought it was ‘survival of the fittest ‘.
One day during a trip to Vietnam/Bali with a gorgeous friend of mine. We were talking about supernatural stuff- psychics, healers, black magic that is all very very real in south asian countries and even Africa. We don’t see it much in Australia. But I did grow up hearing my dad tell me stori 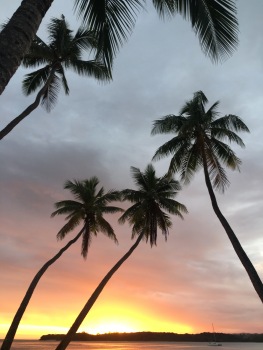 es of supernatural stuff that would happen in Indonesia when he was there.
So when I came back to Bali, I was still with an atheist boyfriend. I made a decision to ‘check out’ church. I was feeling empty from my work, my relationship and life in general.
I stepped into church and literally an overwhelming feeling of love swept over me as I sat in the sermon. I bawled myself crying and didn’t know why.
I went church once every one to two months, when I didn’t feel weird about it because of my boyfriend, and if my friend was available. But I felt something was there and I was hungry to know what it is.
My growth was slow, so it wasn’t like I supernaturally woke up and wanted to be a Christian. I actually hated Christians because I left my church due to ‘judgy Christian leaders’ and never felt worthy enough to be ‘christian’. I know so many people who are burnt from the Church! But along my walk, I’ve just had a revelation that those people are humans too who make mistakes!
As I slowly learnt more about God, I started seeing how he had been protecting my life ever since I was born. I started to SEE that he wanted the best in my life and had a huge calling on my life.
Eventually my relationship ended up breaking off (not due to religious reasons) but because he cheated on me previously. And when I was at lowest point, all I could say was all I could grab onto was the faith that God had someone and something bigger and better for me than that person and in life in general.
I had a supernatural growth. I was praying to God, giving him requests, asking for healing. I wasn’t just going to church. It wasn’t religious. I genuinely had a relationship with God. He was answering my prayers. I wanted answers!! I wanted to know if he was real. I was writting them out and seeing them manifest showed me how BIG he truly is.
But it hadnt been smooth and steady. I was dabbling a little in spirituality as that’s what our generation is into. So if you say I went straight into a full blown Christian, I’ll correct you there. I was dabbling into Reiki, New age, still seeing psychics etc. I eventually found out they are SO wrong, and I came out worse than better. I was more confused and had more pain in my body! But it also strengthened my faith in God as I saw supernatural stuff that I’ve never seen before.
Eventually I picked up the bible. After 1.5 years of going to church I finally picked it up! And the revelations of Gods word truly stood out to me. He doesn’t restrict us because he doesn’t want us to have fun. But he truly is protecting us from hurt!
Its been 2-3 years into my walk. The first thing I gave up was sex. Most people don’t believe it but yes i’ve been celibate for 2 years.
I no longer need a relationship to fill me up. God has literally saved me from insecurity, anxiety, jealousy, swearing, lust. I feel whole, knowing that i was made with a purpose and that a heavenly father has his arms wrapped around me! It doesn’t mean I don’t have moments, but I remember what God says about me! That I’m loved, favoured, blessed and I’m a daughter of the living most highest KING!
Did you know that? Have you had that revelation? When you hear that small voice telling you to not do that ‘thing’ which you call ‘instinct’. Have you thought God is speaking to you too? We are so distracted with life, social media that we are hardly in tune with things around us. If you look at the sky , the clouds, the ocean.. you can see truly how glorious is OUR God. Not MY god, OUR God!
We’ve all done bad things. I’ve listed mine… And that wasn’t even the long list. But thankfully our God doesn’t hold them against us. He truly wants to set you free as he did with me. He wants to forgive every single thing that we’ve done. Yes, he sees the good! But our good deeds doesn’t wipe away the bad things we’ve done.
Thankfully he paid the price. When evil entered the world, it entered us. But God came to earth as Jesus Christ to die for US, so we can have forgiveness of OUR bad deeds to enter HEAVEN! It’s a gift. We don’t have to do anything for it other than believe, repent and you are saved!!! but not only that, HE HEALS! He can heal any sickness and mental disease. He can break off chains and bondages, addictions and etc!!!!
So I love Easter and many years I love the Easter bunny and chocolate.. but the true meaning of Easter is Jesus and him dying for us. Don’t reject it!
It’s a gift!! And all he wants to do is give you a give of ETERNAL LIFE! BUT not only that, he wants to give HEAVEN TO YOU NOW! FREEDOM!